Home Features : The World’s Most Wanted

For thousands of years, we’ve built our homes according to both our tastes and needs. Whether for cultural or environmental reasons, our preferences differ from country to country. You wouldn’t find an entire city painted blue in Texas - but in Morocco, the blue city of Chefchaouen (chef-shau-wn) is a cultural landmark. Likewise, you would be hard-pressed to find earthquake-proof buildings in London, but in Tokyo you’d find plenty.

It goes without saying that properties change from country to country. But how do our ideal homes differ? What are the most sought after property features in the world? Are there any staggering differences?

As the leading independent fact-based estate agent comparison site, we’re intrigued to know what makes a home sell. So we set out to discover the world’s most wanted home features.

Here’s what we found: 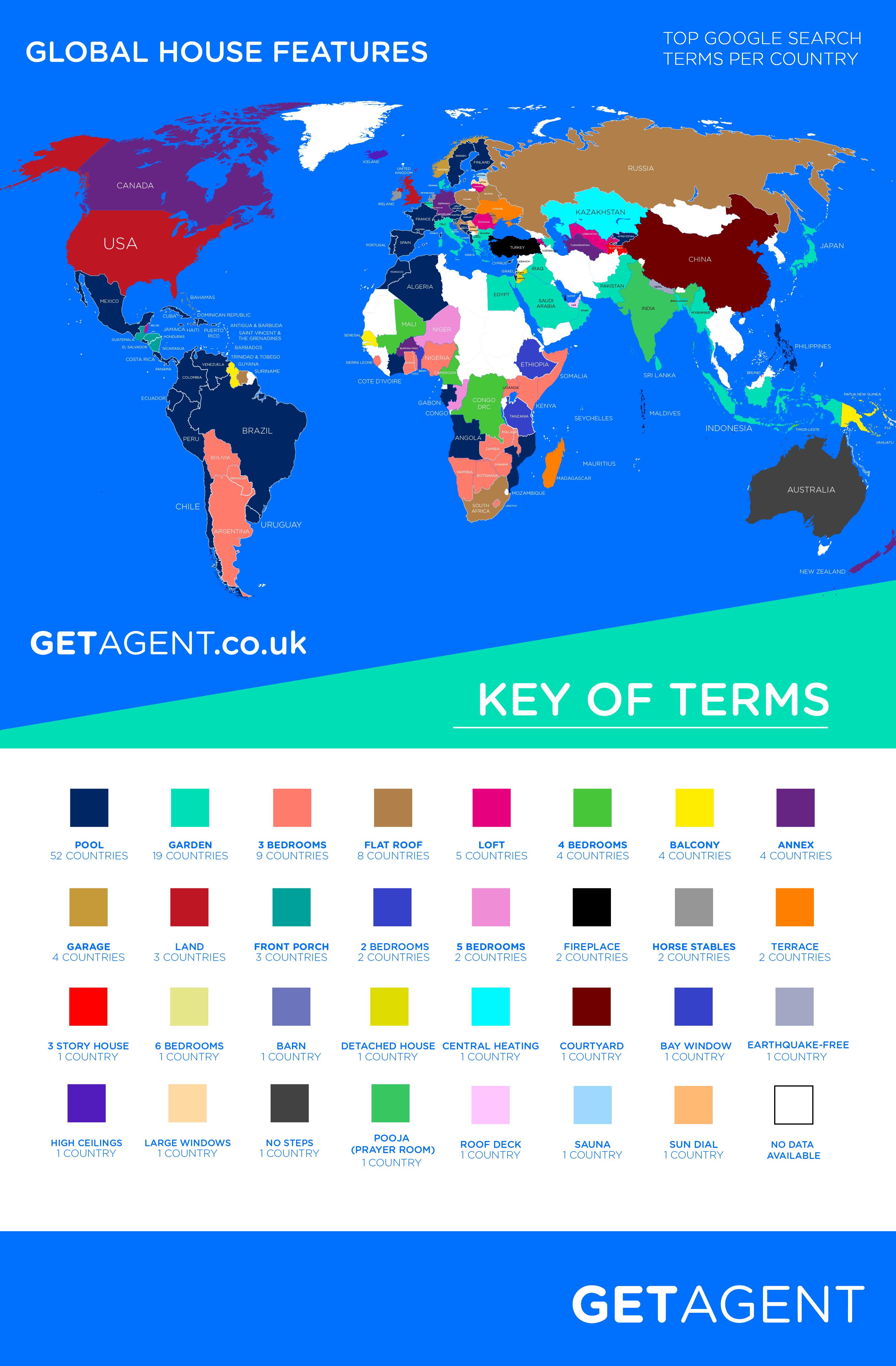 Most popular home feature in the world 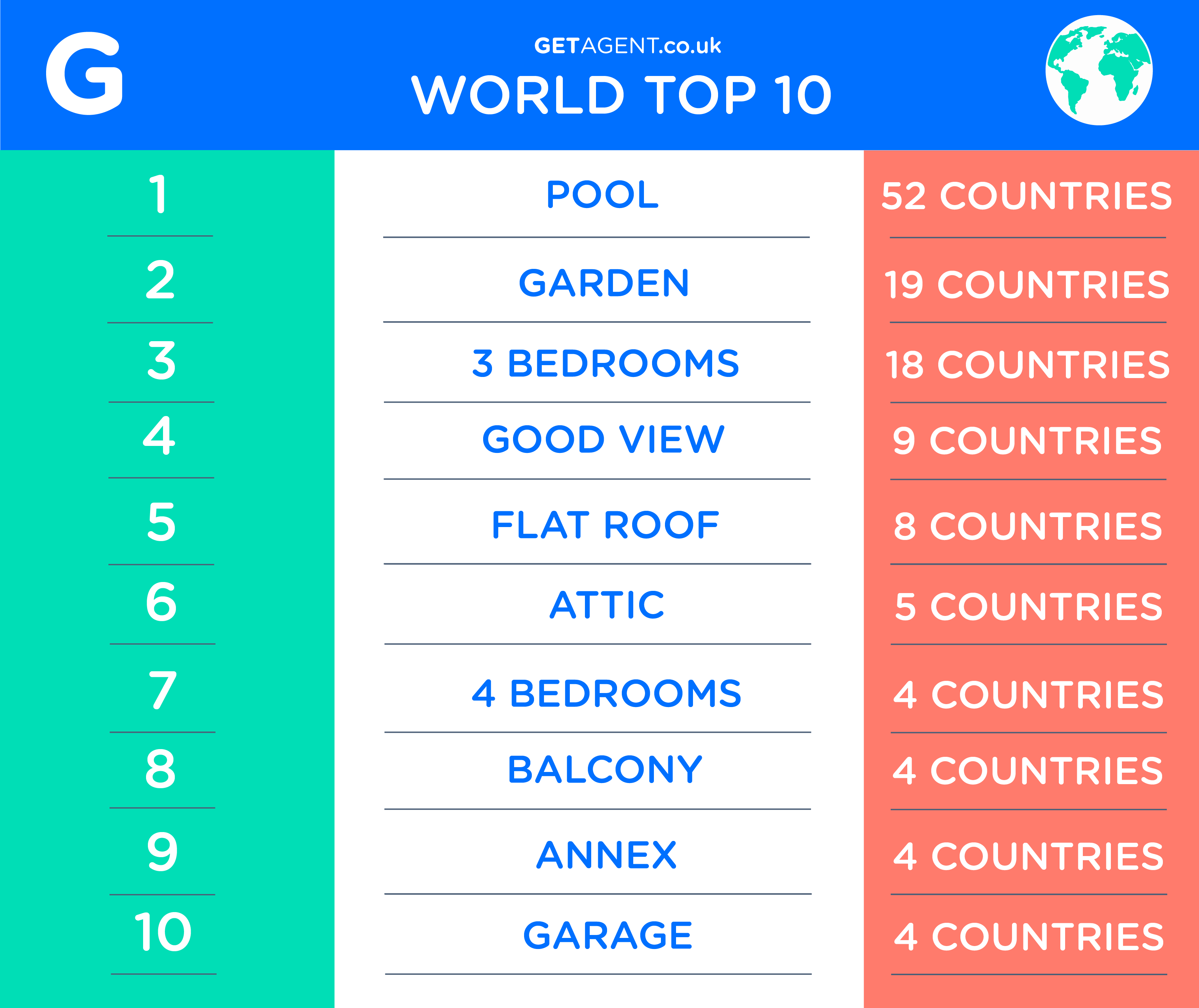 Our research tells us the most popular home feature in the world is a pool. Over 52 countries currently desire properties with swimming pools.

To us Brits, this might sound extravagant. Our temperate (often rainy) climate tapers any fantasies of outdoor pools. Back in 2009, the Daily Mail estimated that there were only 210,000 private pools in the UK. That’s 0.31% of our population today. In the US however, 8% of Americans were found to have swimming pools in their homes. Indeed, pools are a lot cheaper in the US than they are in the UK:

While certainly less expensive than in the UK, $35,000 is still a lot of money. In Sweden, the average cost of an in-ground pool is $25,000, and in Spain you can expect a pool to cost €15,000 - €20,000. Though less than UK prices, these estimates aren’t exactly cheap, but when it comes to buying and selling property, a house with a pool is more desirable than a house without.

Why does the world love pools?

The most searched for home feature in the UK is ‘Land’. Interestingly, this was shared by just two other countries in the world - the United States and Barbados. 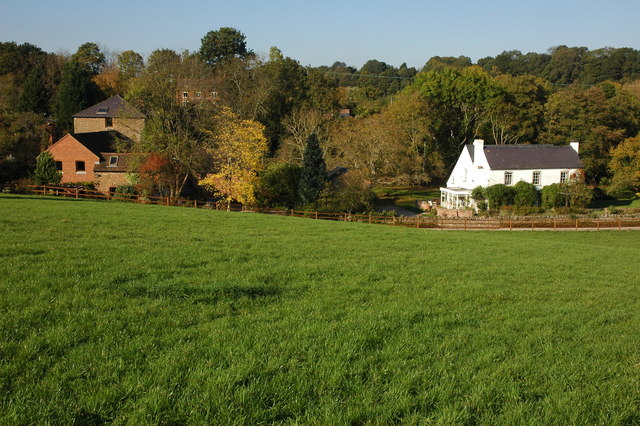 Why is land so popular?

Without further research, it’s hard to say. But historically, land ownership has always been ingrained within Western ideas of success. In the Middle Ages, peasants owed their livelihoods and servitude to the lords who owned their plots of land. Several hundred years later, English Puritans sailed to the Americas with the self-same desire for more living space.

While quite a leap, it would make sense that homes attached to plots of land still carry a sense of grandeur, privacy, and above all else, status. As reported in The Guardian, half of England is owned by less than 1% of the population. Whether aspirational or functional, it makes sense that something so desired would be owned by so few.

With land being the most popular feature in the UK, what were the runner-ups? 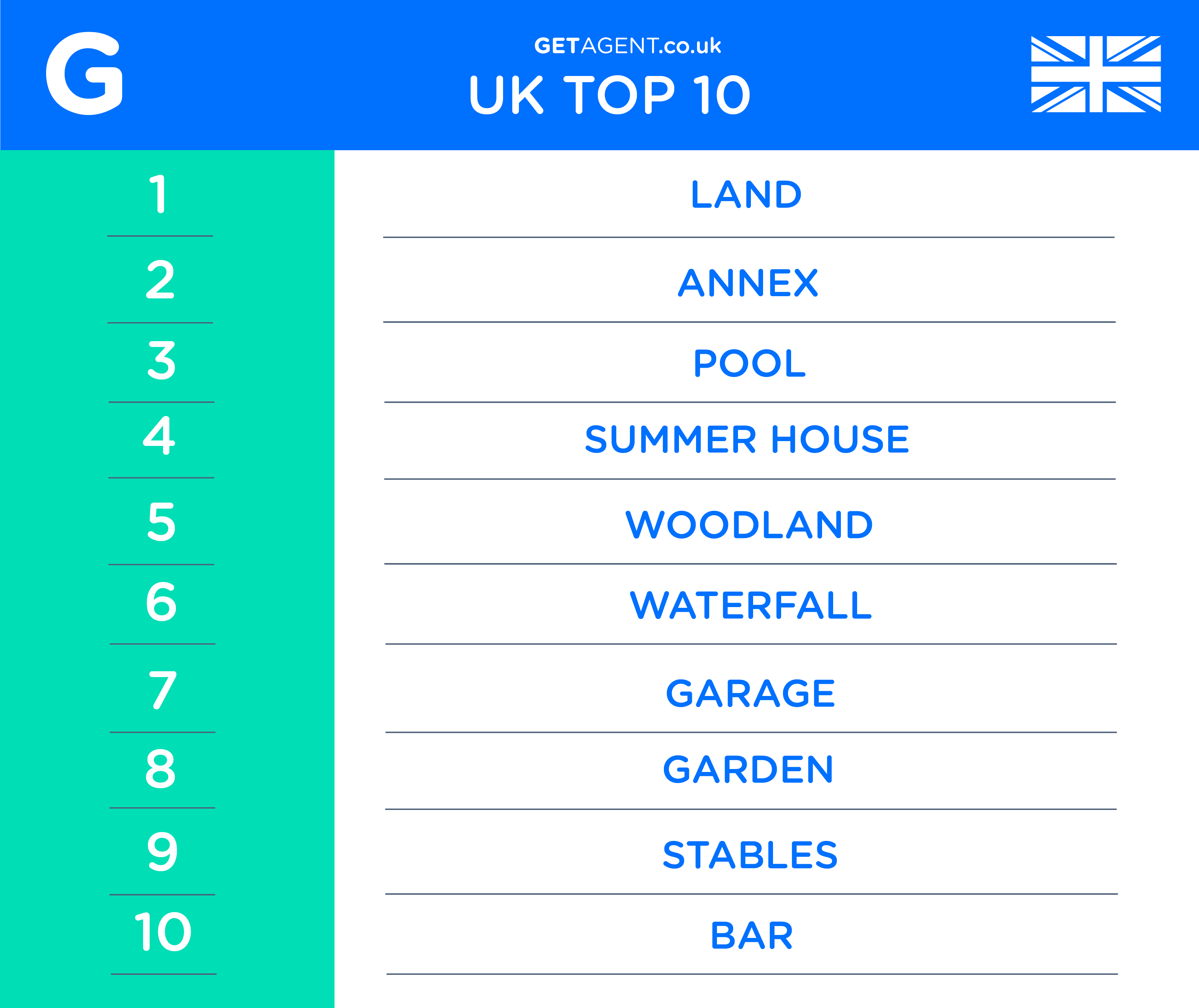 The second most popular house feature is an ‘annex’. Annexes (also known as ‘granny flats’) are popular throughout the world, in particular, Canada, Germany and New Zealand where the term is their most desired feature.

What does the UK’s Top 10 say about our tastes?

While all of these home features are pretty different, you could infer that they’re connected by a desire for more space - whether that’s more room for leisure activities (bars, pools and stables) or a need for escapism (summer houses, woodlands and waterfalls).

In eight countries, flat roofs were found to be the most searched for property feature.

What’s so special about flat roofs, and why are they so popular in these countries?

Generally, flat roofs aren’t generally advised for countries with high snowfall, as snow can accumulate and damage them. Flat roofs are more common in hot regions with little snowfall and moderate rainfall like South Africa, Suriname and Croatia.

So with seemingly little in common between them, what makes flat roofs a desirable feature in these particular countries? We did some research into their practical advantages and disadvantages to find out what the buzz was about.

A cheaper, more energy efficient alternative to pitched roofs, flat roofs offer homeowners the possibility of a rooftop garden, while providing greater stability against high winds. However, their utility comes at a cost, with poor drainage and an ill-fitting design for snowfall. Are there any other reasons why homeowners are setting their eyes on flat roof houses? 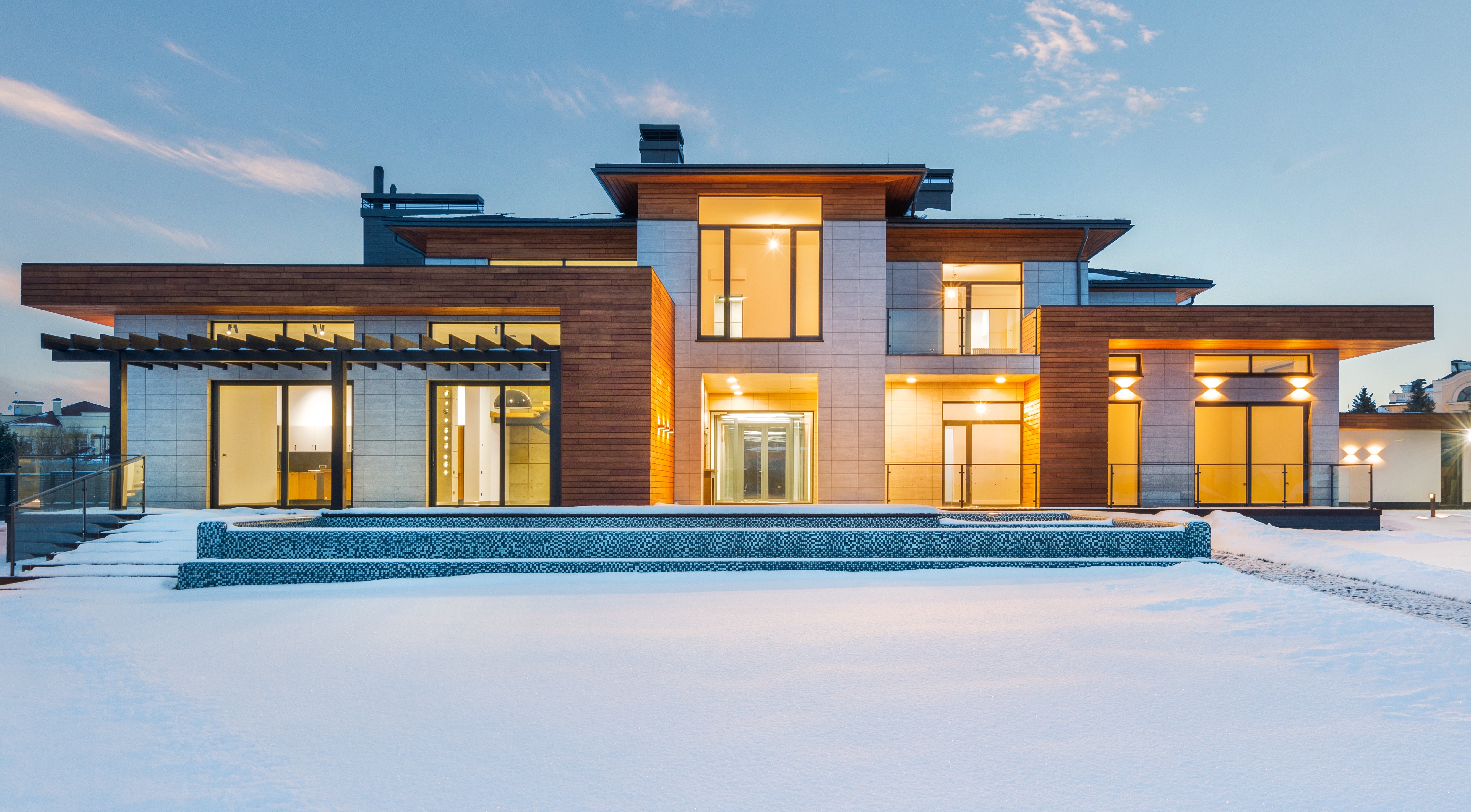 Flat roofs are in style

While practical advantages and disadvantages are important, style and fashion play a huge role when we’re choosing our homes. Many modern properties built in the last decade incorporate a flat roof design. You could say that they’re a popular feature all over the world. Whether or not the popularisation of the flat roof design has influenced homeowners in these eight countries however, is up for debate. 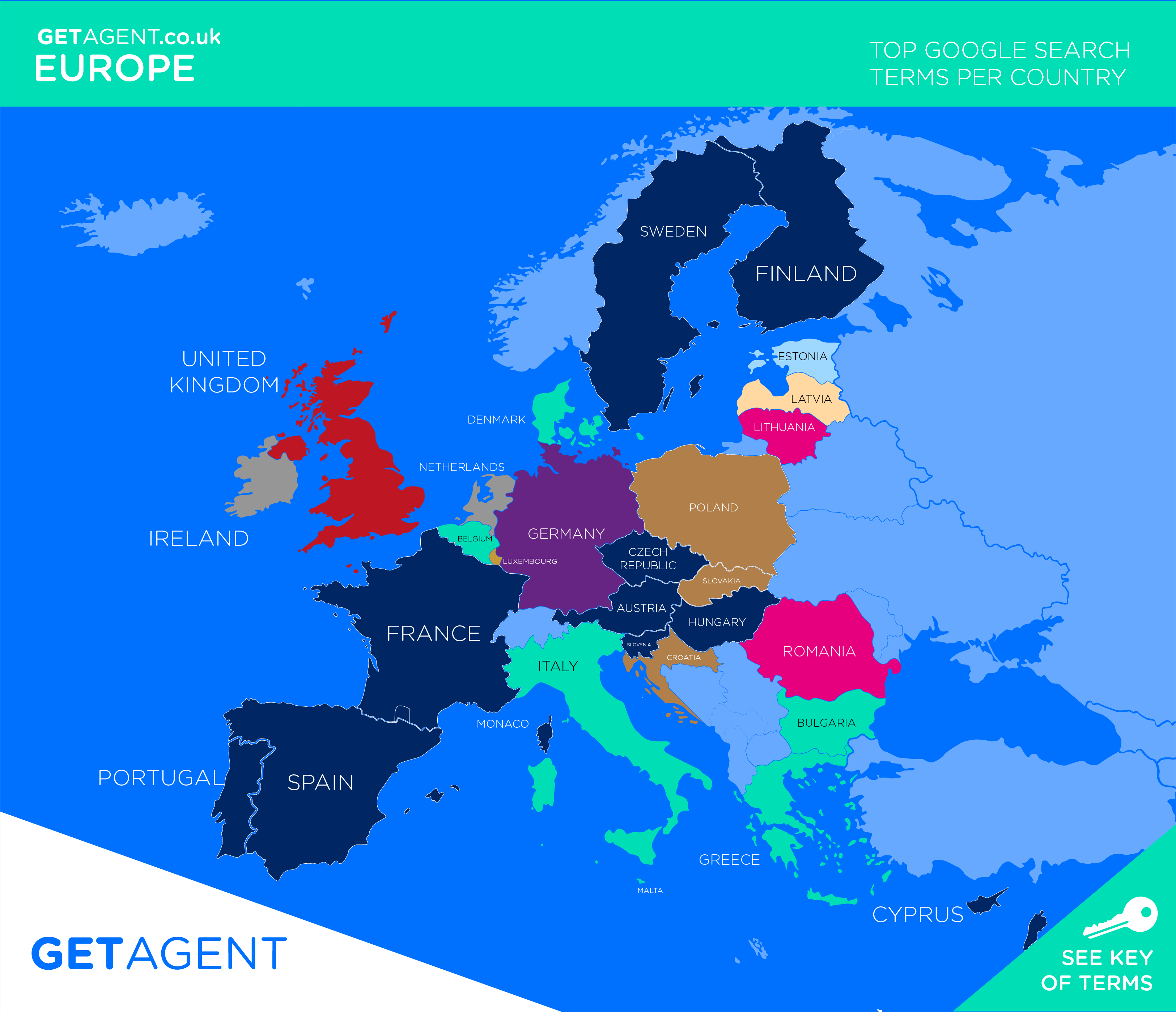 Room with a view

In nine countries, ‘house with a good view’ was the most popular feature-related search. Unlike our ‘flat roof’ searchers, these countries have a few things in common. 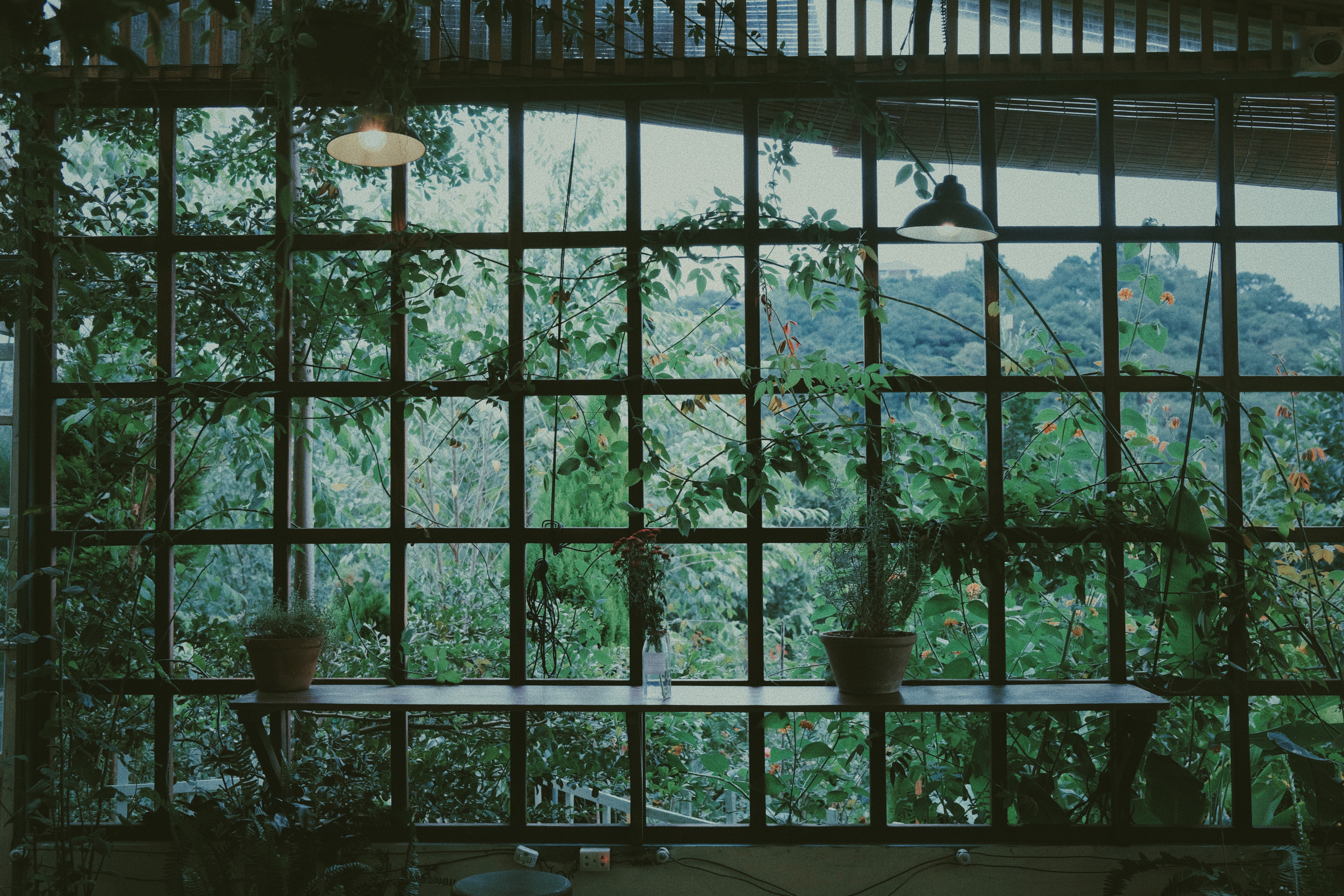 The most common feature among these countries is their climate. Nearly all of them have hot climates, varying from arid, tropical, and mediterranean. Another shared feature is their location. Most of them are located in the continent of Asia (except for Tunisia which is located in North Africa).

Why do these countries want properties with good views?

It’s safe to assume that properties with attractive views are among the most expensive, especially in pockets of densely populated urban areas. As with many of our findings (pools, land, flat roofs), good views denote wealth and status, and would likely help properties fetch a higher price. 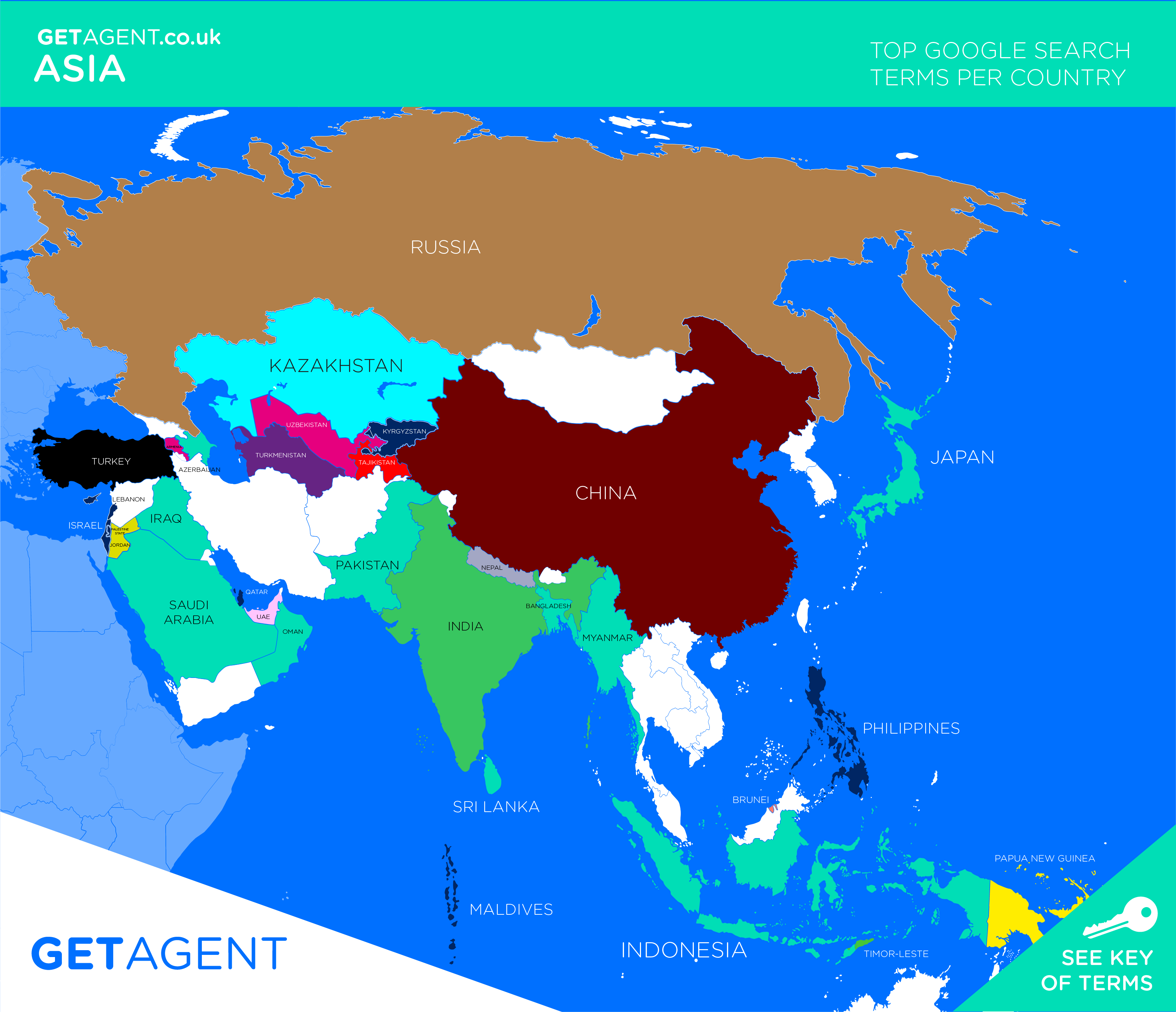 No matter where we are in the world, we share a love for properties that are both spacious and stylish. A house fitting this description will nearly always fetch a higher price on the market. While you’d be extremely lucky to possess half the features mentioned in this research, every house has its own individual qualities that make it a valuable asset.

To find out how much your home is worth, visit our free Online House Valuation Tool today and get an instant valuation report sent straight to your inbox.

We used Google search data to determine the most popular home features. To find our results, we used both English, and the country’s respective, officially recognised languages. Some countries did not have any available data. All data was correct at the time of research, January 22nd 2022.

Related posts
First Time Sellers
How does an estate agent value a property?
Valuations are a huge part of the selling process, as they provide an accurate image of your property's worth. So what do estate agents take into account?…
Read more
Research & Insights
Monumental Selling: How location impacts your house price?
We investigated the average price of houses near the UK’s top 50 attractions. By comparing these to the average price of properties in each city, we reveal the top five attractions that boost the value of your home.…
Read more
4.7 'Excellent' based on 2000+ reviews